The Norwegian medical practitioner, Henrik Vogt, calls for more focus on hope and knowledge, and on those who have recovered from the illness Myalgic Encephalomyelitis (ME).

In a blogpost yesterday, Vogt points to a story about a Norwegian man who was diagnosed with ME, and, which according to Vogt is an undeniable fact, recovered from his illness by using the controversial and undocumented training programme called Lightning Process (LP).

Lightning Process is a method where one learns to change the mindset.

Quote: “Some would argue that these are mere anecdotes, that one needs controlled trials to say anything. From an epistemological (theory of knowledge) point of view, I would disagree.”

Furthermore, Vogt states; “It is time that we listen more to those who got well. In debates – and research – about CFS/ME and other so-called «medically unexplained symptoms», the focus has been one-sided on those who are still suffering, on the dark side.  More should be written on those who make it into the light. This documentary is a place to start.”

Absolutely; it is very important to focus on those who have recovered from ME.

However; why does Vogt choose to completely disregard the stories of all those ME-patients whose health has dramatically deteriorated because of LP?  And those, who in desperation have tried everything; from wheatgrass, reflexology, papaya to healing etc., who have experienced no other effect than a slimmer wallet. And; why doesn’t Vogt mention those who have recovered by medical treatment, for example Ampligen, or Rituximab and B-celldepletion?

And if it is knowledge Vogt wants to convey, why doesn’t he mention the IOM report, which leaves no doubt that ME is a physical illness –in which it is impossible to recover from by changing ones mindset.

The IOM report is based on the review of more than 9,000 peer-reviewed research papers and states the following: «The cause of ME/CFS is unknown, but symptoms can be triggered by an infection or other prodromal events that immunization, anesthetics, physical trauma, exposure to environmental toxins, chemicals and heavy metals and, rarely, blood transfusions.»

And, if it is hope Vogt wants to convey, why doesn’t he mention the groundbreaking study showing biochemical changes in metabolism in ME-patients, the study which gives real hope, both to find the cause of the illness, and to develop a biomedical test and efficient treatment? Or any of the other interesting biomedical research reports published: http://paradigmchange.me/me-abnormalities/

If it is hope and knowledge Vogt wants to convey, there’s plenty of material available. It is expected however, that the hope he serves is realistic, and that the information he presents, is balanced. 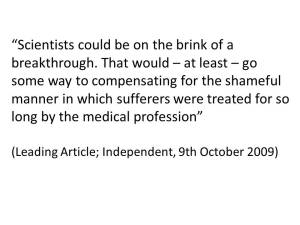 When Vogt writes, in his original Norwegian blogpost, that «To the extent that the belief itself, that one is suffering from a totally incomprehensible and hopeless illness, is a part of the disease mechanisms……»  he contributes to maintaining the stigma that ME-patients are sick because they believe they are sick .

So, before Vogt states that LP can cure ME, it is imperative, literally, that he checks the research first. Because: Lightning Process lacks evidence.

As a health care practitioner, he should institute safeguards to protect those who may be injured by treatments that lack scientific evidence. But by supporting alternative therapy and anecdotes portrayed in the media, Vogt contributes to increased uncertainty and distrust among healthcare workers in a situation where there is a desperate need for more knowledge and research.

In the humility, in the discussion between professionals, and the uncertainty Vogt and the media amplifies, certain actors take the opportunity to introduce something new to the picture: their absolute certainty. Suddenly, certain people show up with very clear answers. Clear enough to claim that one can get rid of a serious illness by changing the mindset – even in children.

There is still uncertainty surrounding the cause of ME.

But; does this uncertainty justify another ones absolute certainty? Lightning Process is not recommended in the Norwegian medical guidelines, but because of the considerable uncertainty surrounding the illness, Mrs. Live Landmark proceeds with her business-concept (LP), without further critical questions and with significant help with marketing. This is a significant economic opportunity.

Internationally, the media has been far more critical to Lightning Process, and in the country of origin England, it is prohibited to promote LP towards specific diagnoses. Therefore Vogt, as a practicing physician, should refrain from promoting undocumented therapies.

Lightning Process has become a multimillion industry in Norway; where one have no rights neither as a consumer nor patient, and where the coaches are not trained health professionals.

There is no scientific basis for the absolute certainty that underlies LP. That alone should get responsible physicians to think about what they choose not to denounce.

For; what if Vogt should take into account the fact that ME-patients actually do get even sicker by using this method. Will he have to wonder if he has contributed to blurring the facts, and drawing attention away from other factors that could be the root causes of the disease, and by so preventing more adequate help? What would such a disservice say about his influence, accountability and judgment in the matter? Is that how he takes care of his patients? Is that how he is a spokesman for the most vulnerable?

When Vogt speaks out, and when he is considering to do research on ME, he should first of all learn to distinguish between ME and the so called “medical unexplained symptoms”. He should also listen to those who have tried LP under pressure from doctors and the social security service and getting worse, and thus been accused of lacking motivation and commitment – only to end up being deprived of their social rights and benefits.

If Vogt is genuinely interested in listening to patients, and taking advantage of their often dearly bought experience , he can read the Norwegian ME-associations report on patients experiences. 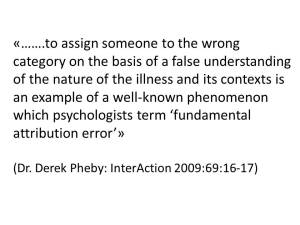 On the one hand Vogt criticizes patients and health care workers for relying on anecdotes, practicing outside the Norwegian medical guidelines and refusing to deal with established medical science. And now, on the other hand, he refers to anecdotes and undocumented treatments that are not part of the established medical science and presents them as “undeniable facts”.

Theories about the interaction between the mind and body playing a role in cause of the illness were dismissed a long time ago.

«Given what we have learned in the past eight years about this illness, it is intellectually embarrassing two suggest that ME is a psychological illness.»